Sun had reached its afternoon peak. Wind was making its own patterns on the sand. The dune
formation in the midst of the flora and long stretch of coastline on the other side is a site in itself.
The Sleeping Bear Dunes stand proudly overlooking the beauty of Lake Michigan at Empire in
the Great Lakes state of Michigan. The entire stretch looked like a vast desert. It was awe for
first timers like us to imagine that there could be dune formation in the midst of greenery.
The climb to the dune was exhausting but worth the experience. The climb seemed easy and
we started running along with the crowd. Excitement was at our core once we climbed the cliff
and saw a vast stretch of sand ahead and a cliff yet again. The impulse was that we could easily
make our way and experience the gift that lay ahead of us. We climbed the subsequent peak
and saw ahead that there was yet another cliff. The wind was having its rendezvous with the
sand which was an obstacle in our path. One cliff after the other was like a never ending loop.
Finally we saw “The thing” that was lying ahead of us. The beauty of the Lake Michigan was
captivating and a site which would make people make this tiring climb umpteen times. I
wondered how many people must have climbed more than once to experience this heavenly
sight.
Tired and exhausted, we descended to the place where we had begun. The benches placed
were the first thing we needed desperately. Most of the benches were occupied by families
enjoying their afternoon lunch so we went to a nearby bench where a person was sitting
casually reading a book. He looked like he was in his early seventies. Being the voracious
reader that I am, I tried getting a glimpse of the title of the book but couldn’t. He gave his most
amazing smile and asked about our climb to the dunes. “The climb was exhausting”, was my
answer. And it was! During our climb, we had noticed many people climbing one or two cliffs of
the range and then descending back. In a very brief conversation with him, he told us that he
had climbed the dunes seven times in his life and had thoroughly enjoyed each step. He still
comes here time and often, with his grandchildren, but now watches them make their climb of
the dunes with their little legs.
We let the man continue with his reading and sat to soothe our aching legs. I turned around and
saw the man peeping out of his book towards the dunes smiling proudly. The satisfaction on his
face showed ample emotions he was experiencing at that moment. Was it seeing his
grandchildren make their climb that made him feel proud or was he seeing the beauty of Lake
Michigan sitting on the bench that brought the smile and emotions on his face? I pondered..

Posted by Thoughts in Bits And Bytes at 10:11 AM 5 comments:

Posted by Thoughts in Bits And Bytes at 9:20 PM 5 comments: 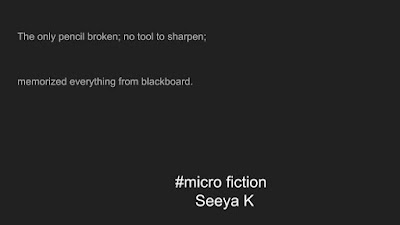 Posted by Thoughts in Bits And Bytes at 10:49 AM No comments: 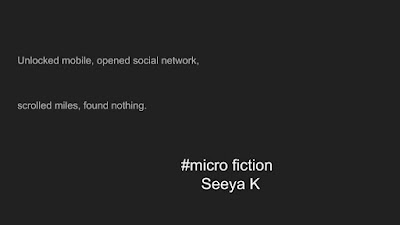 Posted by Thoughts in Bits And Bytes at 11:52 AM 6 comments: 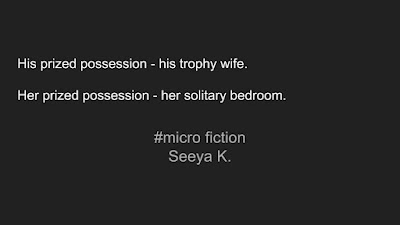 Posted by Thoughts in Bits And Bytes at 8:47 AM 1 comment:

The night sky promised another bright day once the black carpet gave way to its ego alterer.She gazed up to have the final look and closed the window.

She closed her eyes. She hoped things would go the way she had mapped them out. She had put in a lot of efforts and was sure of her victory. Still, the worry did not let her sleep.


She tossed and turned on her bed. No! Her dream was just a few hours away and it wouldn’t let her sleep. What if she didn’t see her dream come true? She would know it within a few hours from now. She was confident, but scared. Too many things had kept her away from realising her dream. But she didn’t give up. But what if her dreams come crashing down? Simple! Try again. Fall, but get up. Do not give up. Come what may, I will not give up, she thought and had sound sleep.
Posted by Thoughts in Bits And Bytes at 11:31 AM 1 comment:

It is said that pen is mightier than the sword. The words penned down on a piece of paper are enough to stir a revolutions. Knowledge can be passed by explaining in words, but to pass it on to distant places, you do need it to be stored somewhere which can be passed to places where the teacher cannot reach. Pen and paper, printing helped in transferring knowledge to lands where the original writer couldn’t reach.


Technology improved over time and the modern time has turned to internet which provides information about everything and anything. It has become easy for anyone who wish to learn about anything. It has surpassed all boundaries The courses which were once unknown or not within reach have been made available in the remotest corner of the world.

Knowledge transfer need not be in just form. As long as the knowledge is transferred from person to person, and from generation to generation, the media need not matter. Pass the knowledge, learn the good things, know the meaning of life.
Posted by Thoughts in Bits And Bytes at 10:08 AM No comments: